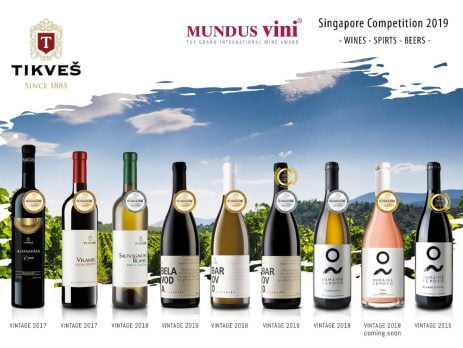 During this year’s spring wine tasting in the framework of the largest wine competition in Germany and one of the most prestigious in the world – Mundus Vini, five premium wines by Tikveš and Domaine Lepovo were awarded gold medals, including: the red wines “Bela Voda 2016 ” and “Alexandria Cuvée” and “Vranec Special Selection” from the 2017 harvest, as well as the white wine “Barovo” and “Domaine Lepovo rosé ” both from the harvest of 2018. At the same competition, silver medals were awarded to the following wines: “Barovo” (red), 2016 harvest, Sauvignon Blanc SS (white), 2018 harvest and “Domaine Lepovo Chardonnay” (white), also from the harvest of 2018.

At the same time, in one of the biggest and most prestigious competitions in the Asian continent, held in Singapore, the wines of “Tikveš” and  “Domaine Lepovo” won two gold medals at their debut. In particular, gold medals were awarded to two premium red wines: “Barovo” from the 2016 harvest and “Domaine Lepovo Grand Cuvée” from the 2015 harvest.